One of the things that we love most here at OLAS is getting to know our clients’ unique love stories. Today we are sharing with you the engagement session of an outrageously adorable couple, Jen + Mike, whose love story is one of our favorites to date (who knew that potato salad could be such critical component love!?!!?) Kait, our Virginia apple of our eye photographer, captured the sweet spirits of these two in a stunningly beautiful engagement session that includes old school Virginia brick and mortar, luscious greenery, and shimmering waters, too. There is absolutely no way we can even begin to tell Jen + Mike’s story as well (and as hilariously!) as they tell it themselves, so please read on to hear their story in their own perfect words. Jen + Mike were just married a few short weeks ago on August 11th, and we are so excited to share their gorgeous wedding photos soon! Jen + Mike, we love your story, and we love both of you, too! xoxo

Love stories can start in a variety of ways and Cupid comes in many forms. For us, it took 14-years, Ruby Tuesdays and Bush Gardens potato salad!

In 1995, Jen, 19 and Mike, 21, were both students at George Mason University and met when Jen went looking for a part-time job and found herself at the Ruby Tuesday’s at the Fair Oaks Mall where Mike was a cook. Over the next few years, a great friendship was formed, birthdays were celebrated, rock concerts and festivals were attended, Dave & Busters silly toys were won, plenty of hours were spent just hanging out with friends and they even called each other roommates for a year in a townhouse in Fairfax. A crush between the two began and flirting was all fun and games until a finger got dislocated during an ice fight between the two. Oops! While the butterflies were undeniable when Jen picked up Mike at his parents house for a night out in Old Town Alexandria for her 22nd birthday, the feelings they had for each other were not finally vocalized until a year later, back in Old Town for Jen’s 23rd birthday. However, with other romantic partners still in the mix and Jen receiving a job offer moving her to Atlanta, Mike and Jen ultimately just remained friends. Over the next 9 years, they stayed in touch and tried to reconnect in person when she would return on business or to see family. However, during one specific trip home, their lives changed forever.

In June 2009, Jen was in town to ironically go wedding dress shopping with her sister Megan and they decided to have a barbeque. On that fateful Sunday afternoon, Mike came over to hang out and they stayed up talking ’til 3 in the morning. While both now single, Jen was living in Florida at the time and while they joked about how it would be cool if she moved back to Virginia, both Mike and Jen stayed in touch but went on with their separate lives. When Jen returned Labor Day weekend for more dress shopping, everyone made the trek to her parents house in Williamsburg to do their favorite family outing to Busch Gardens and on September 6, Mike made the trip down to be Jen’s roller coaster riding partner. While getting ready, Jen shared with Megan her unexpected butterflies and nervousness for what to wear and Mike’s arrival but chalked it up to just excitement to spend a fun day with an old friend. A fun time was had by all and the flirting was assumingly innocent and par for the course for Mike and Jen until they all stopped to eat at the Fest Haus. A chicken dance and several classic German sing-a-long songs later, Jen asked Mike the pivotal question “how is your potato salad”, Mike said “great, try some” and then fed Jen a spoonful. While this might seem trivial to some, it was this action that ultimately convinced Jen’s siblings that their flirting wasn’t innocent after all and by the end of the day, as the sun was setting while Jen and Mike strolled through Ireland, he grabbed her hand and the rest, as they as say, is history!

Fast forward 3 years past a slue of football, baseball and hockey games (and yes, a Cowboys/Redskins rivalry), family vacations to Bethany Beach and Belize (where they swam with sharks and won the main prize in a life-size chicken bingo game), rock concerts ranging from Tool to Sugarland, Big Bag VooDoo Daddy to Mumford & Sons to the couples favorite Matt Nathanson, Krav Maga and boot camp classes, hiking the infamous Cape Cod dunes, 3 moves, 3 sibling weddings, and welcoming 2 nieces and a nephew, Jen, Mike and their little girl Wrigley (their 7-year old lab) prepared to celebrate their 3-year anniversary on a weekend getaway to one of their favorite places Assateague National Park, where horses roam free, campsites are on the beach and dogs are welcome. It was the most imperfect perfect weekend. Due to an extended period of rain, mosquitos were rampant and in under 30 minutes of arriving, they were covered in bites, finished an entire bottle of OFF and were discussing leaving and driving the 3.5 hours back home. But, after buying industrial strength repellant and some creative tent positioning, they decided to stick it out. Two days full of mosquitos and bites, a sand storm that pelted their skin and buried their belongings, a horse tripping over their tent cord in the middle of the night, thunderstorms and a tornado warning (which cleared out all remaining campers) still didn’t force them to leave. Nor did it stop Mike’s determination Saturday night, September 8, ignoring Jen’s suggestion to just have sandwiches and instead still make the steak dinner he had planned to cook with a barely lit campfire and drenched from the rain. Over dinner, they reminisced of their 17-year friendship and how even with everything that went wrong that weekend; they still had such a wonderful time together! As the rain slowed to a light rain/mist, Mike asked Jen to join him outside the tent to see if the campfire was salvageable to make s’mores. His real intentions, when Jen joined him, was not to make s’mores but with Wrigley at their side under the dark sky by the dim light of the somehow still lit tiki torches and light rain falling, was to share the perfect sentiments, drop to one knee and ask her to marry him!

The next morning they packed up, took a family picture on the beach (which you saw on the save-the-date) and keeping the secret until later that afternoon, finally sent their families a picture of the message they drew in the sand announcing they were engaged. The two remaining photos on the save-the-date are from The Mill at Fine Creek where their wedding is taking place and Jen’s mom Patty took a bunch of pictures (and uncovered a hidden photography talent) when they went to visit the venue. The main picture is taken from inside the remnants of the Mill looking out through a window frame in the wall. The smaller right picture, unbeknownst to Jen’s mom, was actually capturing the tearful moment Jen and Mike shared when they realized this is where they wanted to marry each other. The wedding planning had officially begun…..! 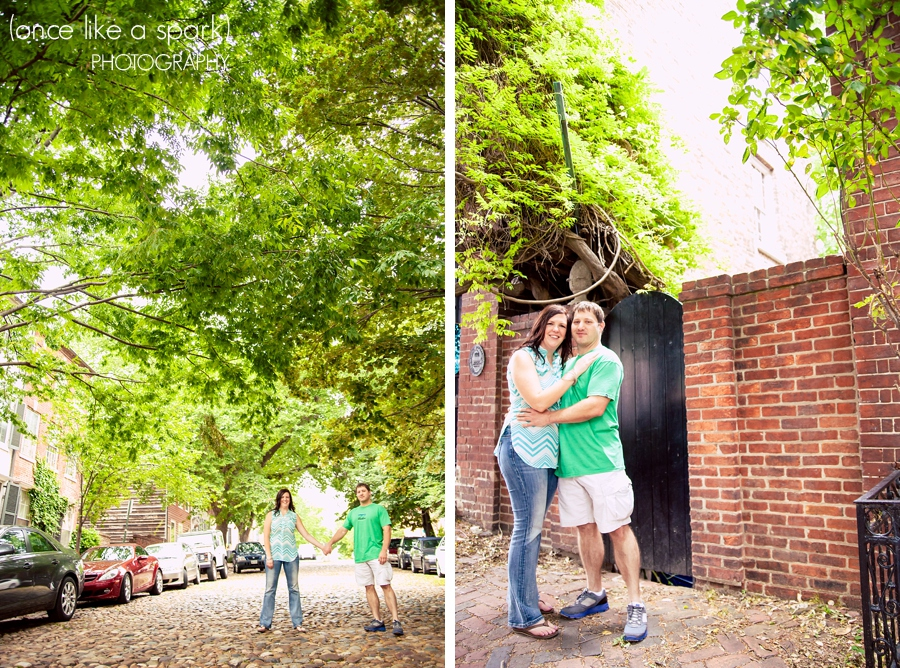 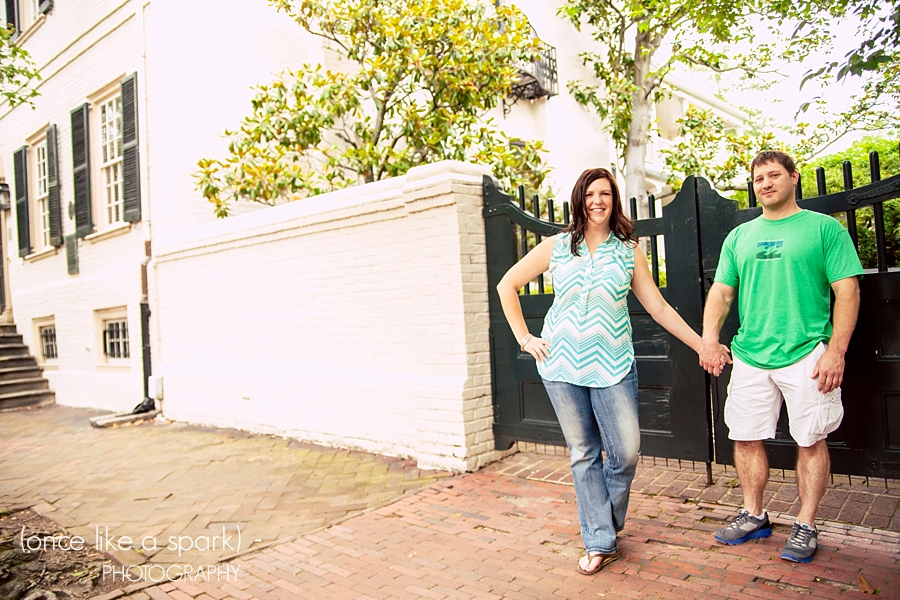 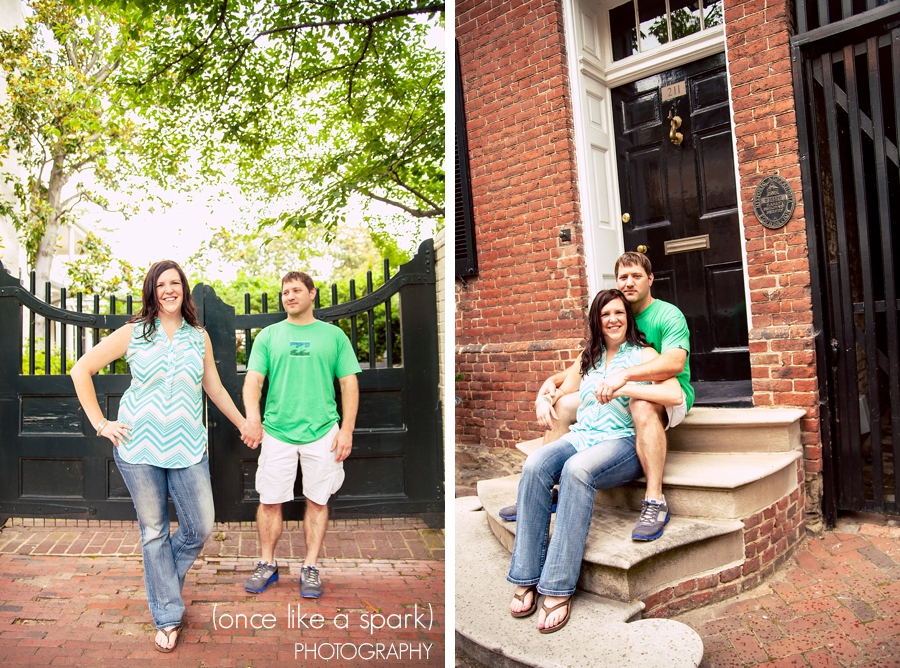 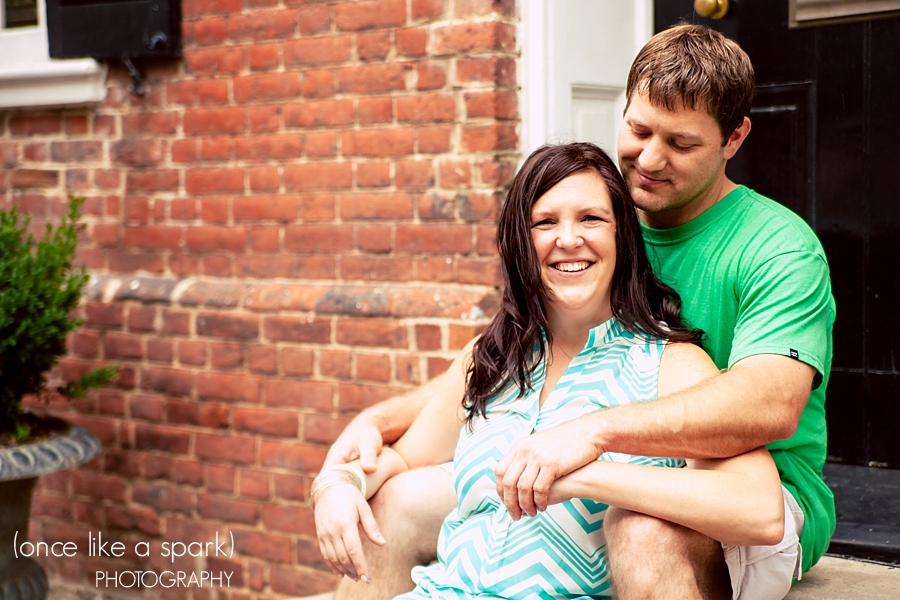 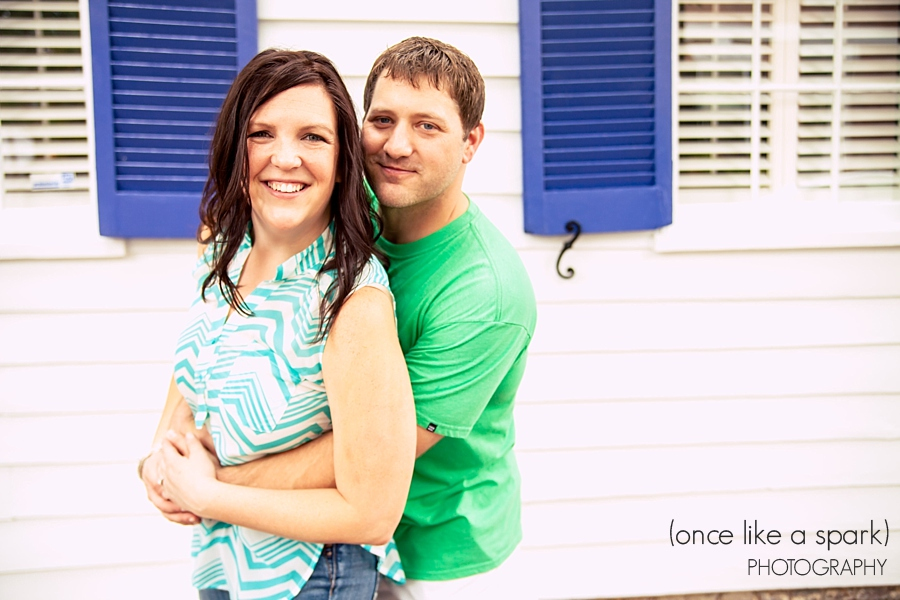 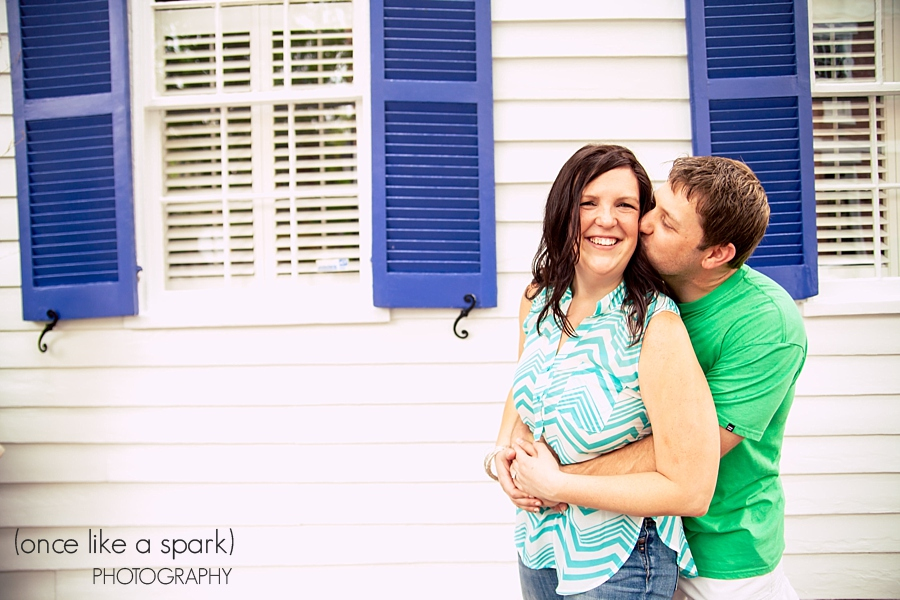 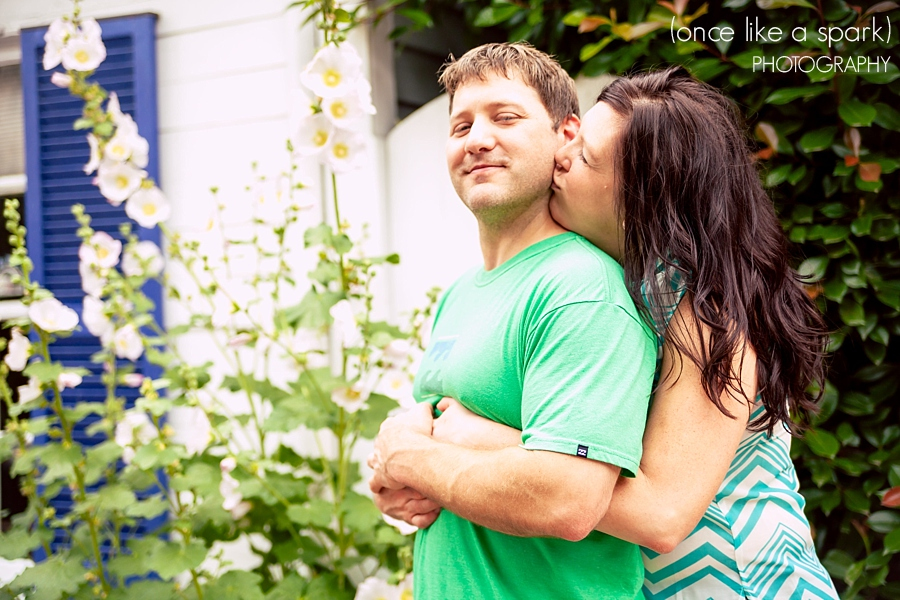 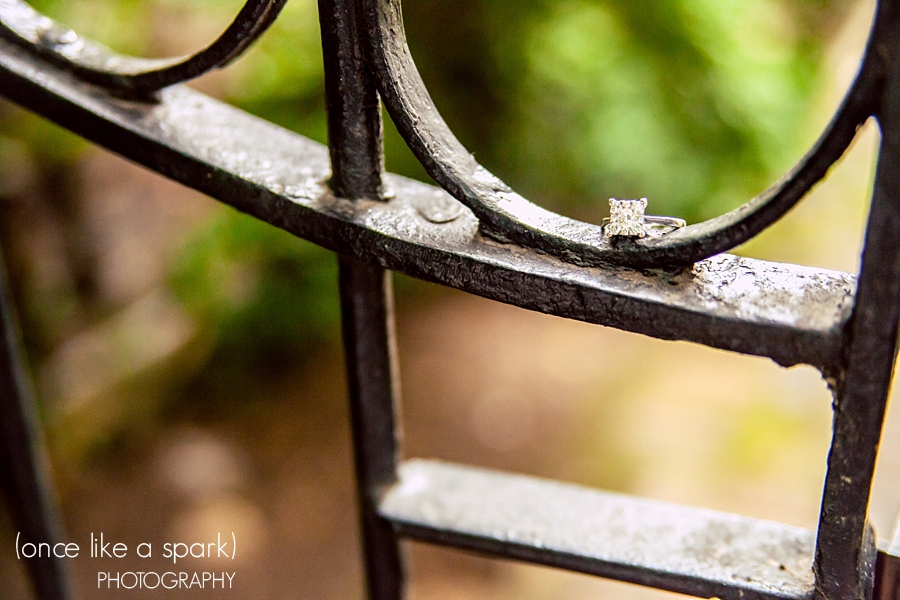 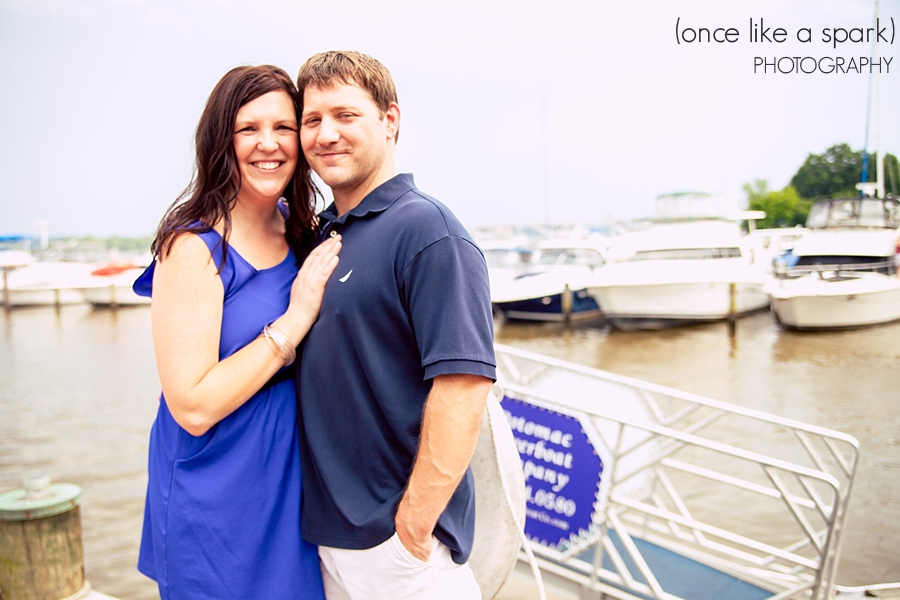 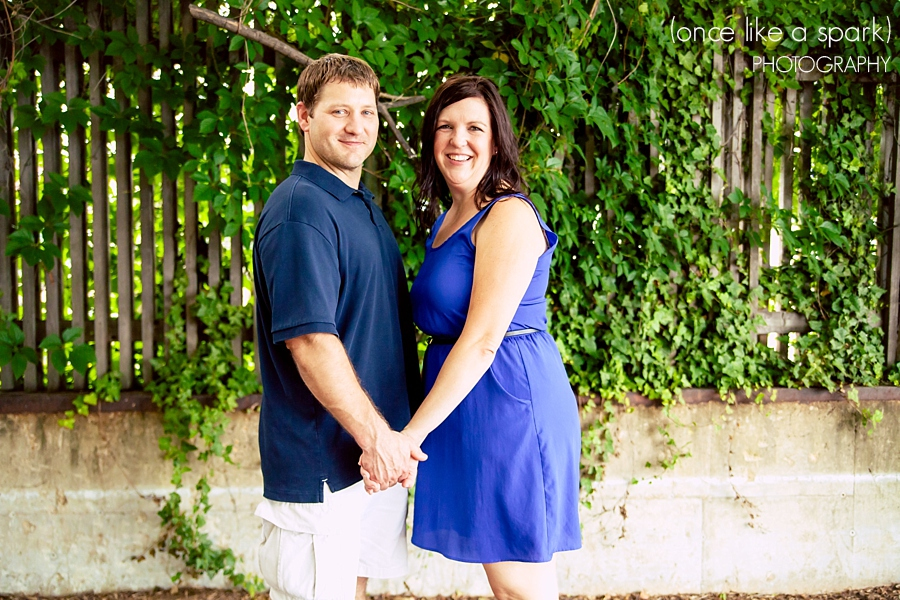 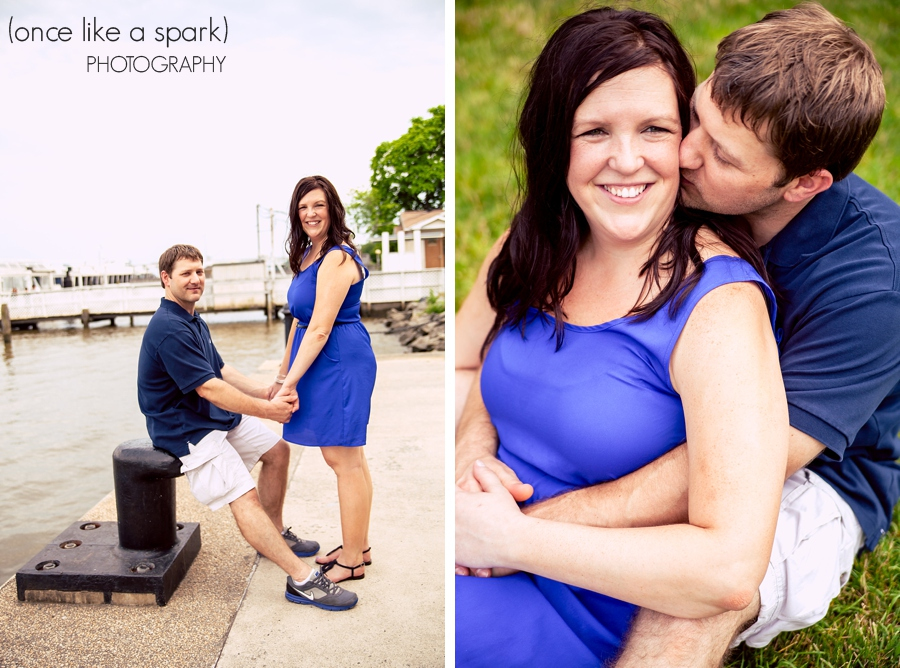 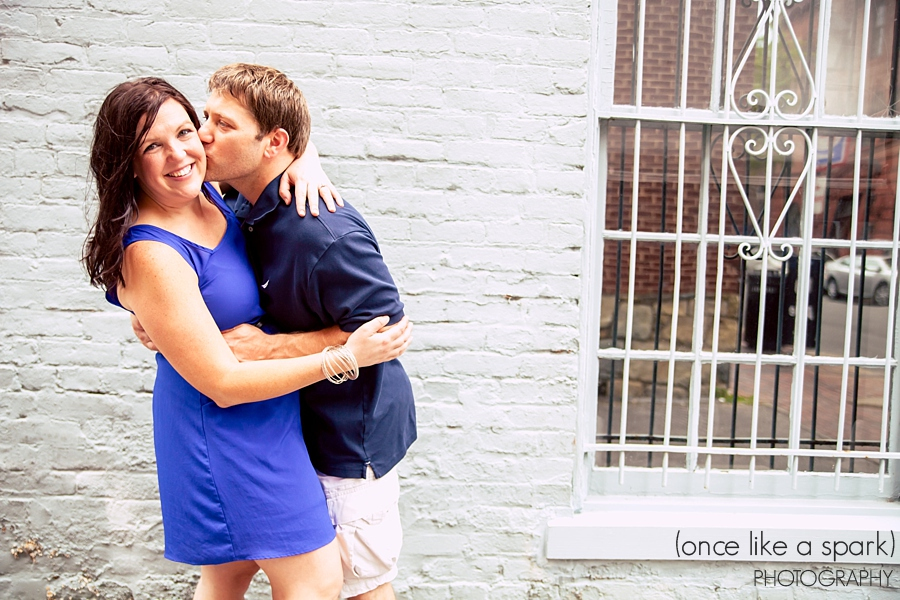 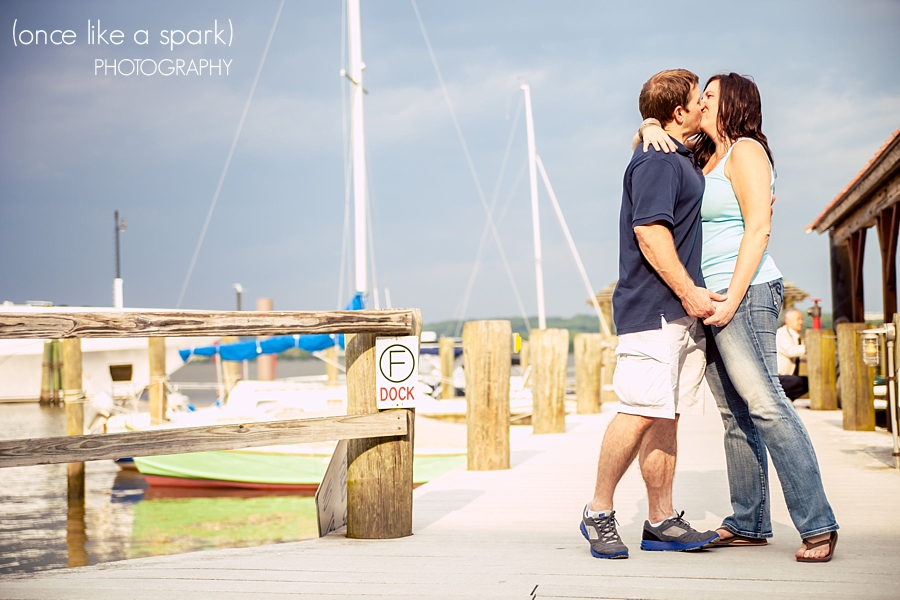 © 2021 Once Like a Spark Photography, LLC. ALL RIGHTS RESERVED. No images may be reproduced without the express permission of Once Like A Spark|ProPhoto Photo Website|DESIGN BY RED MET YELLOW